Image by minka2507 from Pixabay

Do animals hear music? "The Evolving Animal Orchestra" follows a decade on the beat 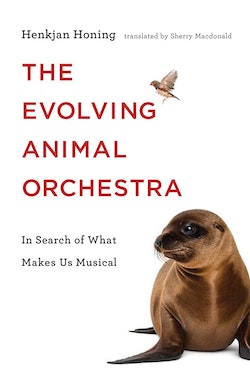 Humans live in a near-constant cacophony of sound, from the rhythm of speech, to the music emanating from our earbuds, to the chirping of birds, and to the sounds of traffic outside the window. And within each of these sounds, humans perceive some element of music.

But is musicality uniquely human or is it possessed by all animals? In The Descent of Man (1871), Charles Darwin wrote, "the perception, if not the enjoyment, of musical cadences and of rhythm is probably common to all animals and no doubt depends on the common physiological nature of their nervous system.”

...the path to scientific discovery is not always linear nor predictable.

Darwin's assumption that human musicality came from a long evolutionary history and that musicality is deeply rooted in the biology of animals with a nervous system spurred Henkjan Honing, a professor of music cognition at the University of Amsterdam, to examine exactly what makes us musical, and how this musicality evolved. He documents the progression of his research in the past decade in The Evolving Animal Orchestra, a new book published in March 2019, detailing the life of an academic researcher, from the travel, collaborations, conferences, rejections, and doubt experienced in academia. He demonstrates that the path to scientific discovery is not always linear nor predictable.

Honing's research into the origin of musicality began in 2009, when he and a group of Hungarian researchers attached electrodes to the scalp of babies as they slept. They discovered that human infants can perceive beat patterns, meaning they begin recognizing regularity and irregularities in rhythm when they are a few days old – even when asleep. Why is this important? The ability to hear regularities in rhythm, or beat perception, is required for all animals to dance or make music. If beat perception is so fundamental, as Darwin suspected, other primates must have it too.

Taking what he found, Honing began working with Hugo Merchant, a neurobiology professor at Universidad Nacional Autónoma de México, in Querétaro, Mexico. Using a similar experimental set up with sleeping rhesus macaques, Honing and Merchant surprisingly found that rhesus macaques do not have beat perception, contrary to what Darwin had suggested. Honing and Merchant published their results in PLoS One in 2012.

Around the same as Honing and Merchant's research with the rhesus macaques, a study from another group scientists from the University of California, San Diego was published about Snowball, a cockatoo who could dance to the beat of music. If the song was played faster or slower, Snowball would adjust his dance. But how could something that diverged 320 million years ago have beat perception in common with us while rhesus macaques do not? The findings threw Honing's previous theories into question.

As Honing explains in his book, scientists' understanding of the evolutionary origins of musicality is still rapidly evolving. If genetic lineage doesn't explain who has beat perception, perhaps it is a shared trait among animals that can learn and intimate sounds?

The book is about the evolution of musicality but it’s also about evolving and shifting views and hypotheses that scientists often encounter in research.

The Evolving Animal Orchestra discusses other aspects of musicality - pitch, timbre, and intonation, for example, but the book's main strength is really its nitty-gritty details of the experiments surrounding beat perception. The book is about the evolution of musicality but it’s also about evolving and shifting views and hypotheses that scientists often encounter in research. Honing’s quest to find what makes us musical is a prime example of how the scientific process and progress occurs.

Sometimes ancestors are more "fit" than their progeny

Which came first, the butt or the mouth? New research gives an answer

Mosquito-borne diseases get a boost from climate change

Caffeine keeps your body fat warm, on top of lighting up your brain

Cuttlefish can learn with the brains they keep in their arms

Some people just don't age, at least not like most

Remembering Ben Barres, the trailblazing trans neuroscientist and mentor, on his birthday

The legacy of the researcher, teacher, and gender equality advocate lives on

With new technology, mind control is no longer science-fiction

Do dogs really, truly understand what we tell them?