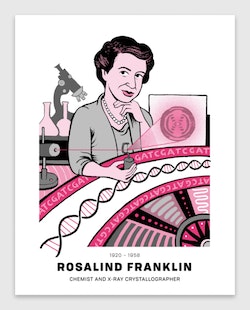 In high school, Rosalyn Sussman Yalow's mother encouraged her to put aside her dreams of pursuing a career in physics. Luckily, Yalow was undaunted. She went on to help develop the radioimmunoassay, which is now used to detect trace substances in blood. Initially developed to measure insulin, her work has been applied to the detection of hundreds of other biological substances. As a result, Yalow became the second American woman awarded the Nobel Prize in Medicine or Physiology.

But her path to science was far from assured. Yalow was born on July 19, 1921 in the Bronx to a Jewish family, and raised during the Great Depression. After high school, Yalow attended Hunter College, a free all-female school in New York City, where she pursued her interest in physics.

While at Hunter, Yalow also worked as a secretary for two biochemists at Columbia University, because she did not believe that a graduate school would financially support or admit a woman. But immediately after graduating from Hunter College in 1941, she was offered a teaching assistantship in the physics department of the University of Illinois at Urbana-Champaign. This milestone would be one of many barriers Yalow had to overcome.

When she arrived at UIUC, Yalow was the only woman of 400 professors and teaching assistants, as well as the first woman in more than twenty years to attend UIUC's college of engineering.

When she arrived at UIUC, Yalow was the only woman of 400 professors and teaching assistants, as well as the first woman in more than twenty years to attend UIUC's college of engineering. (The university had only decided to admit women into their programs due to the start of World War II, which had sent many of the male applicants and current students overseas.) After receiving her PhD in 1945, Yalow worked as an assistant to an electrical engineer at the Federal Telecommunications Laboratory. She was again their only female employee at the time. In 1946, she returned to Hunter College to teach physics.

But in 1947, Yalow began consulting for the Veterans Administration (VA) through the Bronx VA Hospital, which was interested in funding research into the medical applications of radioactive substances. By 1950, she had left her teaching role to pursue this research full time. In 1959, Yalow preservered, co-inventing the radioimmunoassay. The important technique, which is still used today, allows scientists to measure small amounts of biological substances like insulin in human blood (or other water-based solutions).

Yalow and her collaborators refused to patent the method, instead making it open and accessible to any other researchers or clinicians who might want to use it.

Yalow and her collaborators refused to patent the method, instead making it open and accessible to any other researchers or clinicians who might want to use it. It was soon used to measure insulin levels in diabetes patients, but has since been applied to hundreds of other biological substances like vitamins and hormones, many of which researchers had not previously been able to measure.

Even as she became a famed researcher, Yalow held fast in her beliefs that women should fulfill traditional roles at home. She married Aaron Yalow, a fellow student, in 1943 while at UIUC, and had two children. Her faith continued to be important to her throughout her career, and Yalow strongly believed that the traditional roles of homemaker and mother should be a priority in women's lives. She wrote, "All women scientists should marry, rear children, cook, and clean in order to achieve fulfillment, to be a complete woman."

...she influenced many women during her time at Hunter College, some of whom, like Mildred Dresselhaus, would go on to become recognized for excellence in other STEM fields.

Though Yalow faced many hurdles as a result of the male-dominated nature of physics, she was not a supporter of the feminist movement, nor did she champion improved treatment or representation of women in the sciences. Yalow felt that the feminist movement encouraged women not to become mothers and wives, which she viewed as important. She chose to believe that the lack of women in physics was primarily due to lack of interest in the field. But this is not to say that she discouraged women from pursuing careers in science—in fact, she influenced many women during her time at Hunter College, some of whom, like Mildred Dresselhaus, would go on to become recognized for excellence in other STEM fields.

Over her lifetime, Yalow received several prestigious awards for her work, including a Fulbright fellowship to Portugal, the Gairdner Foundation International Award, the National Medal of Science, and the Nobel Prize in Medicine in 1977. She retired from the VA hospital in 1991, and passed away 20 years later, in 2011. Though Yalow's feelings about the role of women in science may not fit modern versions of feminism, her accomplishments and perseverance helped pave the way for female scientists to pursue careers in science and engineering.

We ask other scientists from our Consortium to respond to articles with commentary from their expert perspective.

Even as she became a famed researcher, Yalow held fast in her beliefs  that women should fulfill traditional roles at home. … She wrote, “All  women scientists should marry, rear children, cook, and clean in order  to achieve fulfillment, to be a complete woman."

This is fascinating to me. It seems that she had accepted as truth  (possibly as part of her faith?) that it was significantly more work to be a woman scientist than it was to be a male scientist, but that it was right and good for it to be so. I think that may be the main difference between her feminism and modern feminism; whether or not it should be harder for women to balance family and career. For some women, like  Yalow, it is a privilege to be primarily responsible for the home and  children.

I wonder how much work her husband had to put in to make this possible as well. A very common piece of advice I’ve heard from successful female physicists with families is, “Find a good and supportive partner, because it is impossible otherwise.”

From a speech she gave:

We cannot expect in the immediate future that all women who seek it will achieve full equality of opportunity. But if women are to start moving toward that goal, we must believe in ourselves or no one else  will believe in us. We must match our aspirations with the competence, courage, and determination to succeed, and we must feel a personal  responsibility to ease the path for those who come afterwards.

I’m just so interested in how she didn’t see the societal pressure on women to be homemakers and mothers as part of what kept women from achieving “equality of opportunity.” Especially since we know that becoming a parent pushes women out of science far, far more than men.

Totally agree with your commentary. I found this article surprisingly difficult to write because of the intersection of Yalow’s groundbreaking research, her beliefs about women in STEM (“if they wanted to do it  hey would, so maybe they just don’t”), and her staunch opposition to  many of the tenants of modern feminism. At the same time, she mentors the women that she does encounter, and many of them go on to become amazing scientists as well. I didn’t want to give the impression that she was anti-women in STEM, but some of her beliefs about the roles of women were barriers to other women who wanted to pursue careers in STEM. Yalow is a really interesting example of a scientist whose faith/cultural beliefs wouldn’t seem to work with her career as a  scientist and yet somehow work very well for her.

An important thing to keep in mind when learning about the life of accomplished scientists is, how did they achieve their  success? Lots of hard work in the lab, of course, but what other factors came into play? If you or students you know are trying to become scientists, it’s helpful to consider all the factors of success.

One key stepping stone in Yalow’s career was the ability to attend Hunter College tuition-free. In the 1930s, fewer people had college degrees compared to today, so this was very fortunate for her. Without free college education, would Yalow have gotten a Nobel Prize? If today more people could access college for free, would we see even more progress in the sciences?

Another piece of Yalow’s success was her supportive family. For example, her husband encouraged her to seek research positions, even though women were not typically considered for those jobs. She chose a supportive man to be her life partner and it helped her achieve a Nobel. Successful scientists don’t exist in isolation, they surround themselves with the right people in the lab and at home so they can reach their full potential.

Your morning walk, no matter how far, can help you live longer

Climate change is almost too big a problem to study. The solution? Volcanoes.

Can exercise counteract the effects of aging on our muscles?

How emergency forces innovation & one Italian scientist advanced our understanding of COVID variants.

Each week, we'll send you the story of a pioneering woman in STEM. From ancient scholars, to women's rights activists, to current researchers, there are so many fascinating scientists you may not have heard of.