Meet Chien-Shiung Wu, the "Queen of Nuclear Research" and destroyer of natural laws 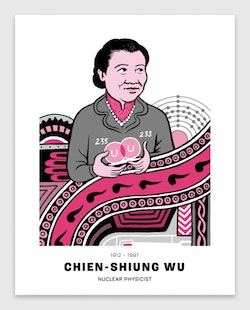 In 1936, a young physics graduate from China boarded the SS President Hoover, waved goodbye to her parents, and began a weeks-long journey to the United States. Her final destination was to be Ann Arbor, where she planned to start her PhD in physics at the University of Michigan. Little did Chien-Shiung Wu know at that moment that she would never see her parents again, that she wouldn't study at Michigan, and that she would go on to work on The Manhattan Project and become one of the most preeminent experimental nuclear physicists of all time.

While at Berkeley, Wu researched beta decay and the production of radioactive isotopes, which led to her joining The Manhattan Project in 1944. There, she developed a process for separating uranium metal into isotopes U-235 and U-238.

Later in her career, Wu moved to Columbia University, where she conducted what became known as the "Wu experiment." Physicists had long believed that nature had no preference for the direction of quantum particle spin, the property that gives everything from tiny quantum particles to large bodies like planets angular momentum. This was known as the Law of Conservation Parity. Some of Wu's colleagues at Columbia began to believe that nature might prefer left or right spin, and convinced Wu to setup an experiment to confirm their suspicions at the end of 1956.

As Wu later recalled, it was an opportunity too good to pass up, even though it meant skipping a vacation and the chance to visit China for the first time in two decades:

This was a golden opportunity for a beta-decay physicist to perform a crucial test, and how could I let it pass? — That Spring, my husband, Chia-Liu Yuan, and I had planned to attend a conference in Geneva and then proceed to the Far East. Both of us had left China in 1936, exactly twenty years earlier. Our passages were booked on the Queen Elizabeth before I suddenly realized that I had to do the experiment immediately, before the rest of the Physics Community recognized the importance of this experiment and did it first. So I asked Chia-Liu to let me stay and go without me.

As soon as the Spring semester ended in the last part of May, I started work in earnest in preparing for the experiment. In the middle of September, I finally went to Washington, D. C. for my first meeting with Dr. Ambler. … Between experimental runs in Washington, I had to dash back to Columbia for teaching and other research activities. On Christmas eve, I returned to New York on the last train; the airport was closed because of heavy snow. There I told Professor Lee that the observed asymmetry was reproducible and huge. The asymmetry parameter was nearly -1. Professor Lee said that this was very good.

Wu's experiment confirmed that for weak nuclear interactions, nature is slightly left-handed. The finding stunned physicists around the world, who quickly repeated her work and confirmed her results. In 1957, the colleagues who proposed the theory and experiment were awarded the Nobel Prize for upending the concept of parity. Wu was inexplicably not included in the prize, but was later awarded the Wolf Prize in Physics for her contribution to the Standard model.

She improved on Newton's work and outclassed Voltaire

A nuclear attack could be a lot like an asteroid strike

Life on Earth is complex and irreducible

On faster spinning planets, life could be hiding out under the atmosphere

Each week, we'll send you the story of a pioneering woman in STEM. From ancient scholars, to women's rights activists, to current researchers, there are so many fascinating scientists you may not have heard of.